Professor Marc Lamont Hill at the United Nations calls for “Free Palestine from the River to the Sea” to chorus of applause.  This 20-minute video says all that needs to be said about Israel’s long-term, illegal occupation of Palestine, about human rights, about the facts on the ground today in the West Bank and Gaza.  CNN fired Professor Hill the day after he spoke the hard truth at the UN. 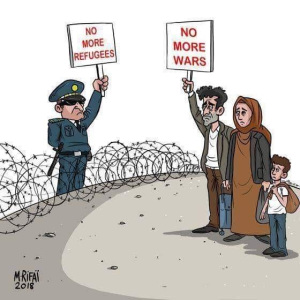 My social media Facebook feed is overwhelmed with photos and messages of horror about the current actions of the U.S. military at the US-Mexico border.  Check out the story here, if you haven’t seen it.

We (I use that pronoun deliberately) have closed the border and we are now violently throwing tear gas canisters and shooting rubber bullets at men, women and children migrants.

Here are several videos of the migrants being attacked at the US-Mexico border.

I’m not shocked by Trump’s aggressive and violent response at the border, and neither should any American be shocked. We’ve been watching the same actions occurring at the fence (not border) separating Israel and the Gaza Strip since March of this year.

Israel, our best friend and ally in the Middle East, has deployed its military to the perimeter fence line shared with Gaza to shoot tear gas canisters, rubber bullets, and…

Although I don’t agree with you on many issues, I applaud your decision to place a hold on the U.S.-Israel Security Assistance Authorization Act of 2018, which cements in the $38 billion weapons deal over the next 10 years that former President Obama struck with Netanyahu.  I suppose the proponents of this deal want it sealed into law (rather than merely an executive MOU) so that it won’t be subject to a change of heart in the future.  After all, $38 billion IS a lot of money and could pay for some big ticket items at home — healthcare, pre-K education, failing infrastructure, for example.

If American taxpayers only knew how our contributions to the U.S. Treasury are subsidizing the human rights violations and instability in the Middle East.

Outrage Over Offensive Festive Display.  Expats are calling for a local shopping centre to be boycotted over an explicit winter display.

A shopping centre in Torremolinos has caused outrage because it’s festive winter display features animals in explicit positions.  Shocked expat Anna Srammer said “I took my five year old into the shopping centre and couldn’t believe my eyes.  I didn’t expect to have the birds and the bees talks with him at such a young age”.

The outrage is mainly directed towards the polar bear display.  The positioning of two of the bears appears to simulate a sexual position.  Julia Clary, originally from Birmingham, says  “I’m not from Birmingham actually, I’m from Sutton Coldfield.  Polar bears simulating a sex act is bad enough, but these bears are simulating a gay sex act.  I know this because the sign says their names are Julio and Enrique, and one can quite clearly see their genitalia if one looks closely”.

A spokesperson from the Torremolinos Watchdog Andalucian Team says that the shopping centre isn’t breaching any laws, but has recommended that they don’t display their festive elves and lego figurines which were planned to go on show in December.  “Whilst we can’t see anything rude about the lego figures or the elves enjoying Christmas, there are those who like to complain about everything and we have advised the centre not to proceed with these displays”.

Local expat spokesperson Anne Fernandez runs a Facebook support group for people who like to express outrage about Brexit and other important political matters like the availability of chocolate covered digestives on the Costa Del Sol.  She says “My members are outraged by this.  These polar bears have Spanish names, the British community simply isn’t represented here.  This is clearly because of Brexit, we feel very unwelcome in the shopping centre now”.

A spokesperson for the Centro Commercial El Imaginario told Costa Del Sol Update “These people are complaining about nothing.  We spent literally minutes planning and erecting our display.  We don’t discriminate.  Animals.  People. Lego.  We are all equal.  Except for mosquitos.  We don’t like them.  They are not welcome”.

Do you think that the display should be removed? Have your say in the comments below.

SOLIHULL ESTATE AGENT: IT IS A BLOODY OUTRAGE i am from Solihull, not brommie land. this display is a safety hazard in the safest place in Europe and these displays are very rude. cause i know what being rude is like .

AN autopsy of the man shot dead outside his Marbella home on Tuesday has revealed that he was shot more than 20 times with an AK-47.

Also known as a Kalashnikov, the gun has been used by the Soviet military, terrorists and now a gangland murder on the Costa del Sol.

The unidentified 58-year-old Frenchman was gunned down as he entered his garage in the luxury area of Nagueles at around 8.20pm.

Authorities recovered the victim’s body from his home on Calle Pizarra, where he lay in a pool of blood.

Forensics experts at the Institute of Legal Medicine of Malaga then found he had sustained bullet wounds to his head, chest and stomach.

It has now emerged that the victim had a police record for drug and arms trafficking and had been previously arrested as part of an operation against smuggling hash in helicopters.

The killer, believed to be hired by a criminal gang, dumped the weapon in a bin, before speeding away from police on a motorbike.

tomie jones- :brommie estate agent continues to say, “Well i am not from Birmingham I am from Solihull ,but Marbella is the safest place in Europe!”

A MAN shot dead tonight in popular Brit hotspot Marbella is believed to be ‘foreign’.

The victim, whose identity has not been revealed, was shot dead at around 8.30pm tonight.

Although his nationality has not yet been confirmed, well placed sources told The Sun that he is foreign.

The incident is believed to have taken place on a residential street in the Sierra Blanca area of upmarket Nagueles, a source told the Olive Press.

He was shot several times as he was opening his garage door, before the attacker fled on motorbike.

It comes after a sudden surge of brazen gangland killings have ravaged the coast in recent months.

The terrifying attacks have seen four victims tortured and killed, while last month two bombs shockingly exploded in San Pedro de Alcantara and Benahavis – believed to have been part of a ‘settling of scores’ between drug traffickers.

Just three weeks ago an alleged mobster was shot in the middle of a sushi restaurant in Torremolinos.

Meanwhile, a Spaniard was shockingly kidnapped and shot at 13 times in front of terrified expats in Estepona on October 2.

In one of the most horrific incidents to date, a 35-year-old was shot, knee-capped and given the horrific ‘Glasgow Smile’ in Marbella, after being tricked into meeting the gangsters in September.

And just 10 days later a 24-year-old Brit was stabbed in the legs by an attacker in Puerto Banus.

Officers believe tonight’s incident could be another gangland attack.

No suspects have been arrested. The investigation continues.

tomie jones says-marbella the safest place in Europe so say the cockeyed estate agents association. Good luck with that guys and dolls.maybe you should form a vigilante group to clean up Marbella of the gangster population.A bit of a problem that would be as they are all living in large and expensive houses purchased through the market. lucrative clientele .mind you if you sup with the devil you are likely to become a vassal of his, very dangerous bedfellows to have.