This from my eyes and ears on the web, Facebook and Blogs

My dear Maurice Its about time you faced up to the truth. I read this the other day on a Facebook posting:

Andrew G**** B**** PÇ****(IT SEEMS TO BE A GAME OF FILL IN THE BLANKS ,LIKE WHEEL OF FORTUNE) SO HERE WE GO  ANDREW GORDON BENNETT PINK ERR CUNT THAT IS THE FIRST  BIT RUDE GOD , U KNOW MIND YOUR LANGUAGE TIMOTHY)in answer to your comment about Tony blair no he is not but we have a weasel named maurice who does the cleaning looks a bit like gobby out of harry potter. oooooh he is real gobby!

This sicko has a blog called the Cir****B***. (CIRCUSBUOY GOD SICKO?¿You are mentioned by name at least twice a day EVERY day. He is a socialmedia stalker who is totally obsessed with you. His jealousy seems to have now spiraled out of control. It is as if YOU are all that matters in his life. He continues to beg you to answer on his page knowing now you never read it. You know the child who has a fantasy friend your this clowns fantasy. Why else does your name continually appear daily on his page. OK GLOVES OFF SERIOUS STUFF  MOSSAD HAS AN AGENDA A SITE WHICH IS THE FLAT EARTH SOCIETY IT DISTRACTS FROM THE ISSUE OF ISREAL AND INSULTS AND DECRYS THOSE THAT POST ABOUT THE PALESTINE SITUATIONDRAGS THESE PEOPLE IN TO THE SUBJECT MATTER FLAT EARTH.Do you see where i am going.back to you god ) He loves insulting by calling you names. These are all characteristics of a stalker

He has no followers , I checked on P765 *** (what page 765 is i do not know sounds like 1984″)He writes to himself using different names like T*** J***.(TOMIE JONES)He is a dreamer, a fantasist. He is destroyed by jealousy oh you always has been and I assume always will be.(THE SENTENCE LOSES ALL UNDERSTANDING HERE HIS EXCUSE IS HE IS DIPSTICKLIP YOU KNOW CANNOT WRITE OR SPELL ,WAIT SLIP THERE GOD WROTE THAT NOT JESUS IT IS JESUS WHO IS DYSLEXIC.OH DEAR MOBO YOU ARE WRITING THIS !)SORRY I HAVE LET THE CAT OUT THE BAG!

He copies and pastes full articles from your blog then changes words to try and make you look silly. If he could I am sure he’d dress like you. (OOOH YES I DO  GOT A 5 EURO WHITE JACKET FROM m&s, a waistcoat with gold chains on always where t shirts you me and alec guinness would look like triplets YOU KNOW THE MAN IN THE WHITE SUIT?

Is he dangerous?(one thing you do not want to do is underestimate me)I don’t think so. Has he got a mental issue? For sure(yes made in your image god ). Is he sad? Very(well not all the time but now i am lost my best friend it really has broke me up , but you would not understand that maurice being the insensitive cruel ,selfish person you are). Its incredible to think its 7 years since you withdrew from public life and yet , as I said, Everyday without fail your name is on his crazed blog.

Just thought I’d let you know. I suppose he’s paying you a huge compliment to write about you EVERY Day! (yes i am ,still would like answers to my questions that you choose to ignore, .YOU SEE THIS IS A PERFECT EXAMPLE OF MOSSAD PROPAGANDA DECRY AND DISTRACT
God!

P.S He thinks this is you! Take it as a compliment.FROM THE FATHER THE SON AND THE HOLY GHOST ,( I WANT TO BE THE HOLY GHOST PLEASE)ANSWER THE QUESTIONS MAURICE!BUT YOU CAN,T WILL NOT . “OH WHAT A WICKED WEB WE WEAVE WHEN WE TRY TO DECEIVE .

I AM GLAD YOU POSTED THIS , DO YOU REALLY BELIEVE THAT PEOPLE READ THIS AND BELIEVE YOU ?OF COURSE THEY DO I MEAN IF THEY DID NOT YOU WOULD LOOK A FOOLISH FELLOW DO YOU NOT THINK .?
Posted

The queen of sweet ,sweet charity,as the saying goes charity begins at home. NOT IF YOUR EGO IS BIGGER THAN YOUR ABILITIES AND IT IS TARNISHED,STAINED,BY YOUR SELF IMPORTANCE.Then others have to go away for fear of being tainted,tarred with the same brush.”IT is time to remarket myself as a CORNflake”said he .Yet he has failed to rebrand his product as fresh new and clean,shite sticks and people have long memories .

Tampons are not a luxury. While the TORIES disagree — and recently decided to uphold a 5% tax on tampons to that effect — one woman is fighting back. Charlie Edge, 22, stood outside Parliament, refusing to use any sanitary products while on her period (or “free-bleeding”), in order to prove just how non-essential these products are.LEEDING TORIES AT IT AGAIN !

“Everyone keeps saying ‘haha omg how quickly would we get free tampons if everyone stopped wearing them?!'” Edge wrote Friday in a Facebook post. “So, I’m giving it a go. … Maybe bleeding on their doorstep will get the Tories to do something about this?”

Since Edge started her protest, she has been “getting lots of dirty looks” from passers-by who also yell at her “to get a job,” she wrote. But she refuses to give up. 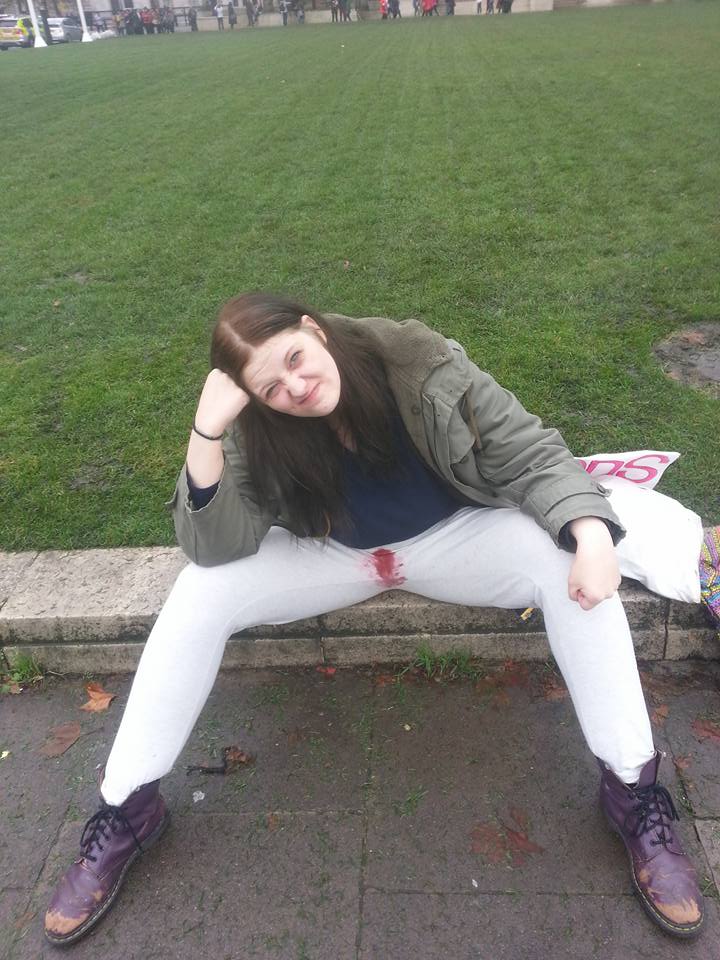 The tampon tax: “It is absurd that while men’s razors, children’s nappies and even

free from VAT, women are still having to pay additional costs on what

is already an expensive yet vital product,” MP Alison Thewliss told the BBC in October.

The U.K. isn’t alone in perpetuating this tax: While most U.S. states allow exemptions for non-luxury items deemed necessities, like groceries, medical purchases or even clothes in some states, state governments rarely include tampons in this list, according to Fusion. In fact, only five states (Maryland, Massachusetts, Pennsylvania, Minnesota and New Jersey) have actively decided not to tax tampons, according to the report.

But many women argue that tampons are not only essential to their daily lives, but the inequitable cost with which they’re saddled hardly superfluous. Tampons are expensive: The Huffington Postestimated that the average woman spends $1,773.33 on tampons over the course of her reproductive life. 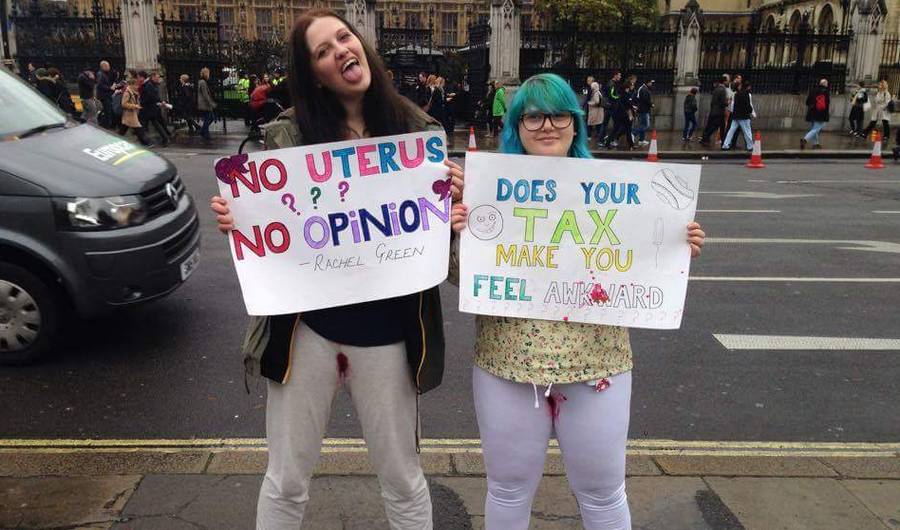 Evidence of broader sexism: While Edge is notably targeting this specific tax, the problem she’s targeting is ultimately much bigger than menstruation.

“I think it’s important to note that this isn’t just a women’s issue — not all women have periods and not all people with periods are women,” Edge wrote in an update, People reported. The response to her actions and the issue itself, she continued, points to ingrained sexism and double standards.

“How would you feel if you were taxed on the disposal of sperm?” Edge mused of the double standard at play. “Every time you released sperm. Every. Time.”

What’s more, “all the hate I’m getting is based in sexism as is the tax itself,” Edge wrote, adding that she can’t “help but wonder if there would have been as much hate

directed at me and my friends personally if we were young girls.”

It’s high time, therefore, that archaic double standards surrounding women’s periods end — not only on a social level, but political and economic levels as well.

“I get it, periods are yucky,” Edge said in her recent post, according to People. “But I’ve been dealing with them every month for almost 10 years now … Get over your internalized misogyny quick and grow up.”