The status quo in Palestine & Israel is an interminable nightmare for Palestinians living under military occupation for 70+ years, and a shameful failure of the human rights framework adopted and promoted during that same time. 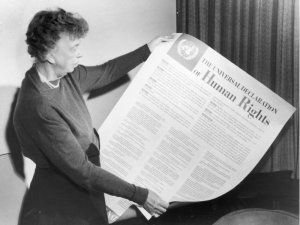 The Israeli declaration of independence in May 1948 was the Palestinians’ Nakba (disaster, catastrophe).

The Universal Declaration of Human Rights (December 1948) was (is?) the world’s beacon of hope, an aspiration for a better life for every person.

Our failure (the international community’s failure) to secure a just and lasting resolution in Palestine & Israel cannot be swept under the rug and forgotten. It’s an indictment upon all of us.

Sam Bahour, a Palestinian American living in Ramallah, in the occupied West Bank, captured a succinct history of the military occupation and the current struggle when he spoke with his daughter. (He shares that beginning at 18:50).