The UK media has buried key facts to narrate a Brexit uprising against Jeremy Corbyn from his supporters.

In its widely shared piece covering recent research on Labour members, the Guardian did not mention that 47% of members support the leadership’s position on Brexit. On the flip side, YouGov found that only 29% of members opposed the position, while 19% are neutral.

In other words, the percentage of Labour members who oppose Corbyn on Brexit is actually less than the 38% that voted for Owen Smith (who outright called for a second referendum) in the 2016 leadership election.

GET THE NEWS THAT REALLY MATTERS

And the percentage of members who think Corbyn is “doing well” exceeds his vote share in the 2016 election (65%).

Yet the corporate media is essentially presenting the longstanding reality that many Labour members are remainers as some kind of uprising against the leadership: 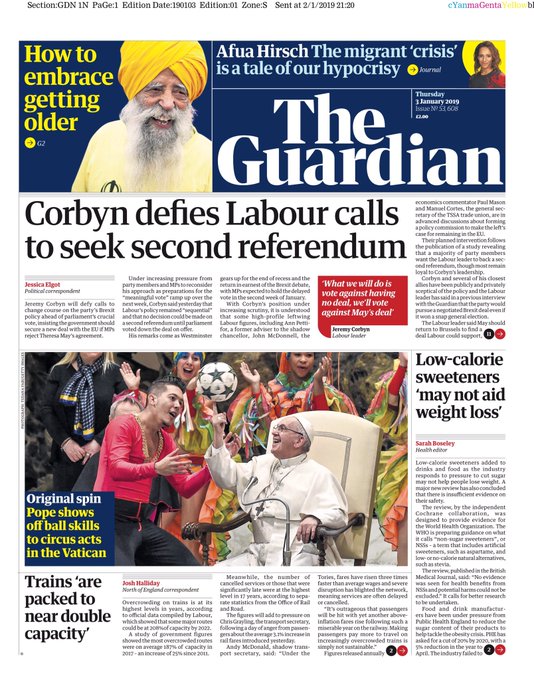 According to the research, 72% of Labour members think Corbyn should “fully support” a second referendum. But that is exceeded by the 84% who want a general election in the likely event that Theresa May’s deal is voted down. And the question on whether Corbyn should support a second referendum did not specify whether that would be a ‘Leave versus Remain’ referendum or a public vote on the deal. This ambiguity risks inflating support for an outright re-run of the 2016 referendum.

Labour members that voted Jeremy Corbyn in 2016 (most of them) overwhelmingly support Labour’s present Brexit position.

Now, as then, the media completely misreports what Labour members actually think.

440 people are talking about this

Labour members are more enlightened than commentators give them credit for. Yes given a choice many would like a 2nd referendum or to remain. But above all else most want a Labour govt & socialist policies. They can see the bigger picture so understand Corbyn’s approach to Brexit

945 people are talking about this

In response to The Canary, the Guardian pointed to an additional article that includes the finding that 47% of Labour members support Corbyn on Brexit. But the outlet did not explain why its editors and author ignored the statistic in the original write-up.

Since Labour’s conference in September 2018, its Brexit position has been:

Should Parliament vote down a Tory Brexit deal or the talks end in no-deal, Conference believes this would constitute a loss of confidence in the Government. In these circumstances, the best outcome for the country is an immediate General Election that can sweep the Tories from power.

If we cannot get a general election Labour must support all options remaining on the table, including campaigning for a public vote.

With the Conservative Party on the brink, Corbyn could soon become prime minister of the UK – not simply leader of the opposition. The fact that so many Labour members back Corbyn’s position on Brexit reflects that reality.