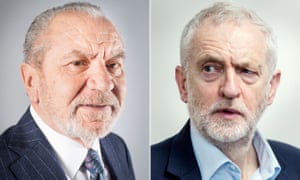 Shadow chancellor John McDonnell has called on businessman and Apprentice host Alan Sugar to “delete and disown” a tweet that depicts Jeremy Corbyn sitting next to Adolf Hitler.Lord Sugar, who stars in the BBC’s The Apprentice, posted a tweet on Friday that shows the Labour leader’s face superimposed next to an image of the Nazi leader in a car during a Nuremberg rally.Alongside it, Sugar tweeted: “Many a true word spoken in jest Corbyn.”Lord Sugar(@Lord_Sugar)Many a true word spoken in jest Corbyn pic.twitter.com/tzI3P6LyIxMarch 30, 2018McDonnell appealed to Sugar to take the image down, saying that now is “the time to learn from each other and unite people”.He said on Twitter: “People have contacted me about Alan Sugar’s tweet. I just make this appeal to him. Please delete and disown it. We all desperately need to bring people together now. We can hold strong views about each other’s politics but now is the time to learn from each other and unite people.”Labour MP John Mann, a critic of Corbyn’s, backed McDonnell, writing on Twitter: “The use of Hitler/ Nazi comparators is demeaning, unwarranted and dangerous. You damage the fight against antisemitism with this @Lord_Sugar. Withdraw this and apologise please.”Sugar later responded: “It’s a joke, but the angry brigade like to moan.”The controversial tweet comes after a tough week for Jeremy Corbyn, amid a row over antisemitism within the Labour party.Corbyn issued a Passover message saying he is an “ally” in the fight against antisemitism.Sugar resigned from the Labour party in May 2015 after an 18 year-long affiliation, attacking what he called “anti-enterprise concepts” and “a policy shift moving back towards what Old Labour stood for”.