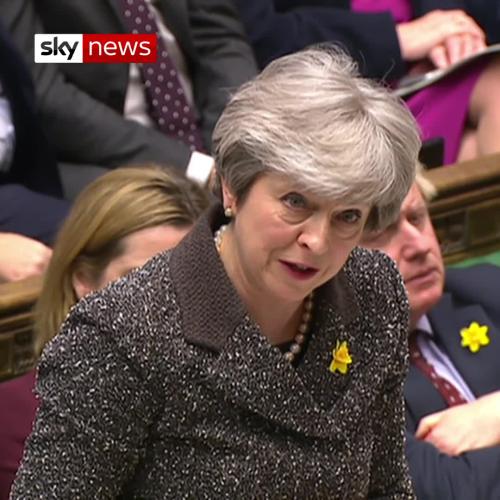 The Prime Minister has rejected EU proposals to establish a “common regulatory area” between Brussels and Northern Ireland.Theresa May insisted “no UK prime minister could ever agree” to the plan included in a 118-page document published by the European Commission on Wednesday morning.Speaking at Prime Minister’s Questions, Mrs May told the House of Commons the EU’s proposals threaten the make-up of the UK.She said: “The draft legal text the Commission have published would, if implemented, undermine the UK common market and threaten the constitutional integrity of the UK by creating a customs and regulatory border down the Irish Sea, and no UK prime minister could ever agree to it.”Mrs May declared she will be making it “crystal clear” to European Commission president Jean-Claude Juncker and other EU officials the Government will “never” sign up to the document.Democratic Unionist Party leader Arlene Foster, whose party support the Conservative Government at Westminster, also hit out at the EU’s plan by branding it “constitutionally unacceptable” and “economically catastrophic” for Northern Ireland.She welcomed Mrs May’s commitment to not allowing any new border in the Irish Sea and for Northern Ireland to have “unfettered access” to the British market.:: May facing demands to publish NI border letterThe EU proposal, outlined by the bloc’s chief Brexit negotiator Michel Barnier, states a “common regulatory area” between the EU and Northern Ireland would be established in the event a EU-UK agreement on a future relationship fails to prevent a hard border on the island of Ireland.The plan would also see Northern Ireland remain an effective part of the EU’s customs union, align with the EU on VAT, abide by Brussels rules on state aid, and remain under the jurisdiction of the European Court of Justice.The text of the EU document reads: “A common regulatory area comprising the Union and the United Kingdom in respect of Northern Ireland is hereby established.”The common regulatory area shall constitute an area without internal borders in which the free movement of goods is ensured and North-South cooperation protected in accordance with this Chapter.”It adds: “The territory of Northern Ireland, excluding the territorial waters of the United Kingdom…shall be considered to be part of the customs territory of the Union.”Mrs May “red lines” on Brexit rule out the UK remaining in the customs union or being under the jurisdiction of EU judges.The EU has been accused of attempting to annex Northern Ireland from the rest of the UK as part of a backlash from Brexiteers against the proposals.But, speaking as he unveiled the EU’s draft legal text in Brussels, Mr Barnier insisted the plan “will not call into question the constitutional or institutional order of the UK”.He claimed there should be”no surprise” for the British Government in the document, as it is based on the agreement made in a joint report between the EU and UK at the end of the first phase of Brexit negotiations in December, which focussed on key divorce matters.Mr Barnier described the document as a “backstop” and promised to “delete” the proposals should a UK-EU trade deal or other solutions prevent a hard border on the island of Ireland after Brexit.The European Commission official denied trying to “provoke” the UK Government but insisted “we must pick up the pace” of Brexit negotiations, highlighting how there are only 13 months until Britain formally leaves the EU.The Republic of Ireland’s foreign minister, Simon Coveney, repeated the description of the document as a “backstop”, adding: “This is very much a default and would only apply should it prove necessary.”This is about delivering on our shared objectives of protecting the Good Friday Agreement and the gains of the peace process, no less, no more.”Labour’s shadow Brexit secretary Sir Keir Starmer, who now backs a continued customs union with the EU after Brexit for the whole of the UK, declared the “war of words” between the UK Government and Brussels “needs to end”.He said: “There can be absolutely no deviation from the solemn commitments made to Northern Ireland at the end of the first phase of Brexit negotiations.”That means no hard border or any agreement that would undermine the Good Friday Agreement.”Theresa May’s failure to offer any viable solution to the border in Northern Ireland has come back to haunt her.”But DUP MP Ian Paisley Junior, speaking earlier, said he was “disgusted” and “appalled” by leaked details of the EU’s paper.Speaking to Northern Ireland Secretary Karen Bradley at the meeting of the Northern Ireland Affairs Committee, he said: “I would ask the Government to show some teeth to the EU that we will not be rolling over to the demands to annex part of our country.”Former Brexit minister David