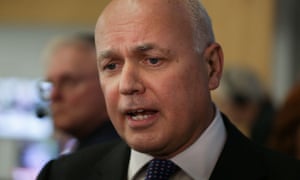 A leaked analysis that concluded Britain would be worse off after Brexit whatever deal was struck with Brussels has fuelled Tory party infighting.Prominent leave supporters including the former party leader Iain Duncan Smith and former deputy speaker Nigel Evans accused pro-EU members of the government of deliberately leaking the assessment.Meanwhile, remain backers including the former ministers Anna Soubry and Nicky Morgan urged the government to stay in the customs union and the single market.Anna Soubry MP(@Anna_Soubry)Govt report says least damaging #Brexit model is #SingleMarket #CustomsUnion so let’s put country before ideology & stay in both January 30, 2018The document, drawn up for the Department for Exiting the European Union, showed growth would be lower under a range of potential scenarios. Even if the UK were able to negotiate a comprehensive free trade agreement – as Theresa May hopes – growth would be down an estimated 5% over the next 15 years, according to the document seen by BuzzFeed.That would rise to 8% if Britain were to leave without a deal, forcing it to fall back on World Trade Organization (WTO) rules. Alternatively, if the UK were to retain access to the single market through membership of the European Economic Area the loss would be just 2%.“Clearly it’s been leaked by someone who thinks it bolsters the softest possible Brexit,” Evans told BBC News.Leaked Brexit impact report: key questions answered Read more Duncan Smith said the document should be ignored. Interviewed on BBC Radio 4’s Today programme, he said: “The fact that you have a leaked document in the midst of what I think is a very unfortunate and pointless row going on about whether or not we’re going to have the right deal, whether or not Theresa May is doing the right thing, I find this altogether a little bit suspicious.“We should just push it to one side and say: ‘Yet another report, not complete, not overseen by the government’ …. We should say, look: ‘It’s deliberately leaked because it gives a bad view, and therefore we should put it on one side and say leave it alone.’”Duncan Smith said the government’s economic forecasts had been wrong in the past: “Any forecast that they make is based again on the economic model that the government hold and that model has been quite highly discredited now because almost every single forecast has been wrong.”Speaking to BBC Two’s Newsnight programme, Morgan suggested she wanted the UK to stay in both the customs union and the single market. She said: “Our constituents are not going to thank us if we have weakened their economic security and their jobs and livelihoods as a results of our negotiations. That shows why it is so critical to make sure that we do not undermine our economy any more than we are already going to by leaving in the first place.” This leaked Brexit memo means Labour must make a choice Gaby Hinsliff Duncan Smith claimed the government had a mandate for a hard Brexit. He told Today: “Theresa May’s Lancaster House statement and also the manifesto made it very clear what the parameters of that leave mean: customs union, single market, we’re out.”A remark by the international trade secretary, Liam Fox, that some Tories would “have to live with disappointment” also drew a sharp rebuke from the leading Brexiter.Fox had told the Sun: “We don’t have a working majority, other than with the support of the Democratic Unionists, and we need to accept the reality of that. I know that there are always disappointed individuals but they’re going to have to live with disappointment.”Duncan Smith said the situation would be improved if cabinet ministers said less and stuck to May’s stance. He told Today: “I don’t quite know what he means by disappointment. My view is leaving is the right thing to do and we will benefit from it in due course. I have a very simple message for my colleagues, generally: people should just calm down. The reality is this was always going to be bumpy.“I think the best message I might send to Liam Fox and others is that, actually, if cabinet ministers said a little less and speculated a little less about where they were, and stuck to what Theresa May has said, we might not have all of these disagreements.”