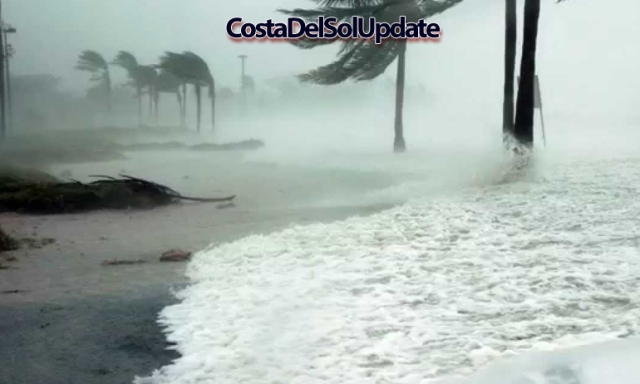 A British family is suing the Costa Del Sol for false advertising following 24 hours of thunderstorms and heavy rain.Brits Take Legal Action Against The Costa Del SolA British family have been left devastated after their family holiday to Torremolinos was ruined by storms which led to power cuts and floodings.  The Robinsons from Preston are now taking legal action against the Costa Del Sol, claiming that they were misled when booking their family holiday.It’s All In The NameJack Robinson says their case is based on the name of the Costa Del Sol.  He said “It’s misleading, it implies that there will be sunshine, which is why we chose to book our holiday here.  We were shocked to find that on Wednesday 18th October there was no sunshine, in fact there was thunder and lightning like something out of a horror film.  If anything it should be called the Costa Del Hell”.The Robinsons had hoped for a luxury beach holiday in Torremolinos Seeking CompensationBirmingham based travel compensation lawyer James McGill has taken on the Robinson family’s case. He says “Actually I’m not Birmingham based, I’m in Wolverhampton.  The Robinson family have a strong case here.  The Spanish have called that stretch of coastline the Costa Del Sol in a clear and deliberate attempt to dupe tourists and con hard working families like the Robinsons out of their money.  I will fight for justice, and thirty per cent of the payout”.The Robinson Family wouldn’t allow our photographer to take their pictureHoliday NightmareMr. and Mrs. Robinson, who are both unemployed, brought their family to Torremolinos hoping for a week of sunshine and relaxation.  Frances Robinson said “Getting all eight children here at the same time was stressful enough, but it seemed worth it at first because our two star hotel is probably worth three stars and they have proper bacon in the morning.  Then the nightmare began early on Wednesday morning.  It started raining”.The 2 star Quality Comfort Hotel in TorremolinosConfined To A Hotel RoomMrs. Robinson says that the family were confined to their hotel during the storms.  “There was nothing to do, Torremolinos only has a beach and we’re not sitting on that during a storm.  We stayed in our room for a bit watching Jeremy Kyle on the TV but then the power went and we couldn’t even do that.  Fortunately one of my sons had an ipad with some charge in it, and we were able to watch an old episode of Trisha which he had on there, but it’s not the same.”The Robinsons had to watch an old episode of Trisha on an iPad .Advertisements Conned And MisledMr. Robinson feels strongly about his treatment at the hands of the Spanish weather.  He is set to return to England on Saturday but has already begun legal proceedings with his lawyer.  He said “We’ve been conned and misled.  We’re here for five days, and one of those days has been ruined.  That’s 25% of our holiday wasted.  We want our money back and we demand compensation from Spain”.The beach where the Robinsons hoped to relax was lashed by the wind and rainParliamentary ResponseThe Parliament Of Southern Spain based in Marbella has already issued a response to the legal action through it’s English speaking solicitor Saul Goodman.  He told Costa Del Sol Update “It’s hard to take this seriously, who do they think they are actually suing?  You can’t sue a stretch of coastline because you disagree with it’s name.  We could probably have done more to prevent the storms, but that’s not an admission of guilt and we’re not putting any money on the table.”Manuel Tormenta from the (translated) Costa League Unique Nationalities Groupo Enquiries says that this claim is ridiculous.  He told us “You can’t expect the name of a place or an area to be an accurate representation of that place or area.  Do these people think that only virgins live on the Virgin Islands?  Surely Cockermouth would be the most popular tourist destination in Britain based on this line of thinking.”Manuel Tormenta from C.L.U.N.G.E.Satisfied VisitorsNot all visitors to the Costa Del Sol this week have been upset about the bad weather.  The O’Reilly family are from Cork in Southern Ireland.  Mr. O’Reilly said “We’re quite glad it hasn’t been sunny this week.  My wife has sensitive skin and burns easily.  Anyway, compared to the weather we’re used to in Ireland it’s been practically tropical here.  We’ll be coming back for sure”.