Kaiser Permanente is a private healthcare organisation based in California.

But unlike many other private healthcare companies in the US, Kaiser provides a complete model of integrated pre-paid insurance along with healthcare which is supposedly provided free at the point of need.

This is a system much like our own NHS but with three major differences – Kaiser’s healthcare provision is much more expensive than the NHS, the healthcare provision side is run for profit and unlike the NHS its cover isn’t comprehensive – it only covers those people who are in work.

Despite that, Secretary of State for Health Jeremy Hunt seems to love Kaiser. He and other ministers have personally visited the company at its California headquarters – several times in fact: 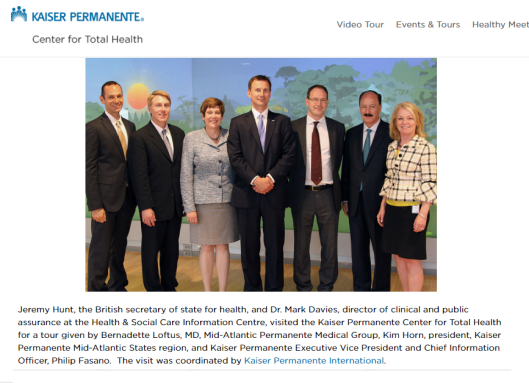 And Kaiser’s own website lists other recent visitors from the UK, including many NHS hospitals and NHS trusts as well as HM Treasury and the Ministry of Health itself (click to enlarge): 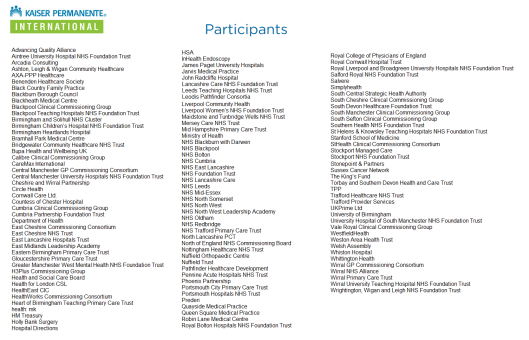 We have already seen that US firms are looking to capitalise as the NHS becomes increasingly privatised, including Kaiser Permanente Foundation‘s senior vice president Hal Wolf who has openly called for the NHS to become “more like Kaiser Permanente“.

Alarmingly, Theresa May has specifically refused to guarantee she will not open up the NHS to US firms in a post-Brexit trade deal across the Atlantic.

Understanding the plans to replace the NHS with the Kaiser Permanente system explains why there has been a recent speeding up of the ongoing marketisation and privatisation of the NHS.

It also explains why the Tories were so desperate to push through their disastrous NHS reforms in the first place. A central plank of the NHS reforms was the formation of Clinical Commissioning Groups – which were openly based on Kaiser’s Permanente Medical Groups and which also happen to be a central plank of Kaiser’s healthcare system.

And understanding the plans to replace the NHS across England with the Kaiser Permanente system goes a long way to explaining why Theresa May has done nothing to resolve the worsening NHS crisis, which she is gambling will only make the public more keen to see changes to a system that is being deliberately broken.